Elf On The Shelf. Or The Lamp Shade. Or Wherever Else You Put Your Stupid Elf.

(This is a repeat performance post. But it still applies. Because I still hate that stupid elf.)

I have a friend. A dear friend who has an Elf On The Shelf. And an addiction to Facebook. During this time of year, I find that combination to be deadly. 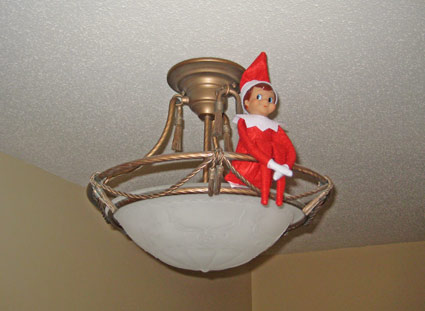 Every other day she has a post of the clever places they find their Elf every morning. Along with clever little tag lines.

Example #1 – Hiding in a lamp, with just his little hat peeking out. “Should we tell him his hat is giving him away? Or just leave him in the dark?”

Example #2 – In a large empty jar with lid tightly closed. “Oops. Looks like Elf has found himself in a pickle.”

Example #3 – Hiding deep inside the Christmas tree. “Can’t see the Elf for the tree.”

I could go on. But I won’t. It depresses me too much.

Quite honestly, I had never heard of Elf On The Shelf until we moved to this subdivision. My rudimentary research discovers that his concept is old. But his commercial phenomenon is recent. Apparently, the Elf is a spy for Santa Claus. He sneaks away every night once the family is tucked in, files his report with Santa and then returns by daylight, always in a new spot and typically up to some mischief of his own.

So, like any sane mother, I reject this holiday hobgoblin. My days are chock full of cookie baking, present wrapping, mantel dressing and shopping, cooking and a little more shopping. Who has time for 25 days of elfin mischief to create?

A lot of moms, apparently.

So many, that now, my children have been exposed to the little guy. And they want to know how Santa knows if they’re naughty or nice.

Santa peeks in on you himself. You boys are two of his favorites.

“Mom. Really? Because Nick’s Elf left him candy canes. Santa doesn’t leave us candy canes after he checks up on us.”

He saves that for Christmas Day. He knows about your last dentist appointment.

“If the leprechauns can visit us how come we don’t have an elf visit?”

I repeat the “Santa’s favorite” response. To no avail.

“Well, Sydney’s Elf bakes her cupcakes and cleans up her room.”

Hey! I bake you cupcakes and clean up your room.

7 responses to “Elf On The Shelf. Or The Lamp Shade. Or Wherever Else You Put Your Stupid Elf.”