Joseph Kony And The Lord’s Resistance Army Must Be Stopped. NOW.

So important. Take the time. 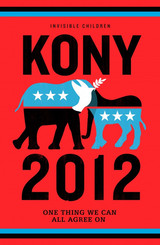 Update: I’ve been criticized for perpetuating a cause that is old (the film is said to be completed in 2004), a cause that only sends 33% of its funds to Uganda and a cause that is virtually “over.” I did my homework. Kony may not be in Uganda but the Lord’s Resistance Army is alive and well. It is still wrecking havoc and terrorizing families and children. The Invisible Children financials are of public record. Google it. Their money is spread out approximately in thirds: to promote awareness, advocacy campaigns and actual on the ground  help. It is my belief that all three components are critical and deserve our support. And I humbly, yet loudly disagree that this cause is over. According to Michael Wilkerson, a freelance journalist who has lived and reported in Uganda, ” the LRA is the longest continually operating…rebel group that commits the kind of atrocities that it commits in the world. You pick any infamous group, and the LRA is right up there, except that it’s still going.” The Lord’s Resistance Army must be stopped. It is a terrorist group, like many others, that should be stopped. Joseph Kony is still at the top of the ICC’s (International Criminal Court) list of most wanted individuals.

I will continue to support groups that promote peace. I will continue to support programs that do whatever they can to create a safer world for our children. No cause is without criticism or imperfections. But the basic tenants of Invisible Children come from a place of truth and goodness. Making others aware is critical to help change our world for the better. And that is all I need to know.